110.  TCBA Yesterday/Gold operates to promote friendship and stimulate competition among baseball fans through playing the APBA Computer Baseball Game (also known as BBWIN) by mail and in person.

112.        The league mailing list may not be used or sold for any form of solicitation that is not directly related to league business.

120.  The association is composed of 16 active managers, consisting of four divisions of four teams each. There may also be an indefinite number of non‑participating associate members.

121.        All members are required to adhere to both the letter and the spirit of this Constitution and all other TCBA rules and practices.  Members must be fair and prompt in their dealings with other members, and answer all correspondence from other managers, including trade offers.

122.        Repeated failure to follow league rules and practices, gross incompetence, or violation involving personal integrity may result in a vote to suspend or expel a league member. The vote will be conducted among the President, Player Control Agent, and Treasurer. A simple majority is required for expulsion.  Once expelled, the member may not rejoin the TCBA except by vote of league members.

130.  The basic operating rules of the TCBA shall be as follows:

132.        All players are owned from year to year by the same team, unless released, including league action to release a player, or traded.

140.  The officers of the association are the President, the Treasurer, the LMPT Commissioner and Player Control Agent.

141.        The President interprets and enforces TCBA rules, recruits and selects new members, and arbitrates any conflicts between members (except as provided in Rules 370‑74). The President names members to fill any vacancies in officer positions created by resignations.

143.        The Treasurer collects annual dues fixed by him at a level which will cover anticipated association expenses for the year, and distributes league funds as necessary to cover league expenses.

145.        The Player Control Agent maintains salary totals and rosters of each team in the league. He is responsible for handling the Free Agent Draft and any Free Agent waiver claims that are made.

221.                                     THE LMPT Commissioner will use the facilities available in LMPT to create a post season organization and schedule for the league playoffs.  AIM will be used in the playoffs and will control usage and eligibility with the following artificial limitations and minimum guidelines:

-Starting pitcher must have a SWB = 30+ to start the game.

-Starts/apps by pitchers are limited by the following chart:

·         Split grade starters are limited only as to starts, not apps

310.                             All games are played subject to the Official Rules of Baseball as applicable.  The TCBA plays its schedule using the APBA Baseball Computer Game (BBWIN). If a version of this game later than version 3.5 is used, any features which affect the play of the game which were not included in version 3.5 must not be used, including but not limited to bunting for a base hit, pulling the infield in at the corners, and ballpark effects.

AIM options being employed include:

326.                                     No player may be removed from the game without a defensive substitute available at his position, unless his team is tied or behind in the ninth inning or later. If it becomes unavoidable to use an ineligible player at a position, a weak hitter who once played or might be expected to play the position shall be used.

The SuperSub may not be traded.  The SuperSub designation is a one year, one time commitment to a specific player.  Once invoked, it is not reversible. Must be Aim and TCBA Innocuous.

A)        No innocuous player can have more than TWO single column power numbers on his card or more than THREE 0's with a double column.

412.                                     All players in a transaction must be transferred at the same time.  Trades may not include players to be loaned, transferred, or named later, or any other type of future consideration.  No agreement may be made to announce a trade or part of a trade at any future date.  No team may trade its Player Mgr or declared Super Sub or any extra free agent (XFA)

Spots 5-20: Cash on Hand when money was eliminated from TCBA

Spots 33-48: Inverse order of previous season finish (The team with the lowest winning percentage picks first.  The team with the highest winning percentage picks last.  In case of a tie, we revert to ‘strength of Division’ to break it.  The team that’s in the stronger Division is considered the better team, hence will draft after the other team he is tied with)

All other seasons omit spots 5-20.

441.                                     All free agent claims are subject to roster and salary cap limitations.  Should a team, thru extreme circumstances, such as multiple injuries and/or fatigue not be able to field players at a position, he can make an ‘Emergency FA Claim’, even if its AFTER the Trade/Transaction deadline.  He must be returned to the FA Pool once the ‘crisis’ is over.  A team can not ‘benefit’ from this situation by claiming a 15 plate app hitter, as an example, with a .500 batting average, to use against his opponent.  Claims of this sort are subject to approval by the Commissioner and PCA.

Pitcher - leader in Fielding Pct with the tie breaker being the pitcher with the most Total Chances serving as tie breaker.

Catcher - leader in Fielding Pct plus Opponents Stolen Base Average determined by combined ranking of both stats. Assuming a list of the top ten catchers, the leader in category gets ten points, second place nine points, etc. Add the two together and highest point total is the Gold Glove winner.

1B - same method as Pitcher (Fielding Pct and TC)

All other positions (2B, 3B, SS and all three OF) - same as Catcher, except Fielding Range is substituted for OSBA.

(3) Awards of $500k each to the players with the longest season-long streaks in:

620.  These cash bonuses will be used to buy a “bonus” pick in the Free Agent Draft.  All teams will get exactly one selection in this bonus round, including those that earned no award.  Ties will be broken by HRV, with the lower HRV drafting first.

717.                                     Managers should take steps early in the season to ensure injuries and/or “unenlightened” use by Micro Managers do not cause a player to fail to reach his minimum requirements. You alone are responsible for this factor and are not excused by “lack of cooperation” from outside forces. 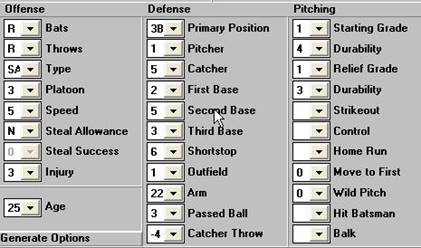 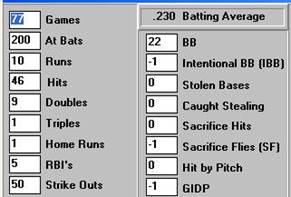 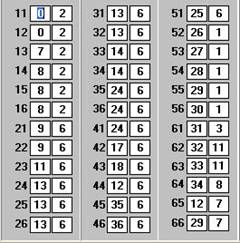 CHANGES or UPDATES in the Constitution:

9/07: Rule 454…change FA draft order from serpentine to top to bottom by round.

Rule 218. “There will be no timeliness bonus paid in this case.” Deleted

Rule 412. References to money removed.  Added XFA’s can not be traded.

Rule 427 through 449 are deleted, describing the rookie auction.

Rule 453. The heart and soul of the new draft order rewrites old rule.

Rule 467. Spelled Extreme not exteme. “will cost the team the standard 500k and” deleted

The SECOND Rule 610 (just before Rule 700) is deleted, referring to cash/salaries